Lauren Riojas-Fitzpatrick (born 1985, Austin, TX) graduated from Texas State University with a BFA in Painting. She completed her MFA in Painting/Drawing from UTSA in May 2019.  Her works have been featured in numerous solo and group exhibitions throughout Texas. Riojas-Fitzpatrick has work in the permanent collection of the University of Texas at Tyler, Ricos Products Company, as well as many private collections.  She lives in New Braunfels, Texas.

My artistic practice is a place for contemplation and repose. The saying attributed to Aristotle, “The whole is greater than the sum of its parts” is a predominant theme throughout my work.  Much like a byzantine mosaic, the overall image is a work of art, but aren’t the glass tiles as well?  My imagery derives from elements found in nature, such as stones and plants, but is manipulated and broken down through processes to create largescale works made from many singular ones.

I use a multidisciplinary approach when creating work, using installation, drawing, hand-cut paper templates, and collage.  In my last exhibition, Mending Wall: A Relic of Truth (March, 2019), I drew parallels between the architecture of a gabion wall and the cognitive distortion of dichotomous thought.  What makes a wall in ones’ own mind is complicated by our personal narratives, yet they feel so real.  A gabion wall is created by using wire and manipulating it into a cage-like form, that is, in turn filled with stones – the wall is permeable by air, water, sight, and sound, and yet still evokes a physical barrier. Much like their physical counterpart, the minds’ wall is made from many little things adding up, but ultimately becomes a singular feeling of truth. Both the physical and psychological walls become the hinge from which tension hangs. In Mending Wall: A Relic of Truth, I invited the viewer to experience a wall as a false notion of truth by interacting with Veil, a site-specific installation of 360 stones, and photographed and mass printed using an industrial laser printer on vellum paper. A single piece of paper holds an individual stone; being translucent, it evokes a feeling of fragility and removes the density and dimensionality the rock once had. Each sheet of paper was sewn together and created a quilt-like display, draping down 9.5 feet from brackets several inches away from the wall, encompassed the entirety of the gallery’s back wall. As the viewer walked by Veil, the paper shroud gently moved. The viewer was forced to acknowledge Veil’s presence, and their direct effect on it.

In the exhibition, Polymorpha (October, 2019), I continued exploring the idea of breaking something down to smaller parts.  The entire exhibition revolved around a young oak tree.  The tree, as a whole, is a representation of life. For the exhibition, I removed all the leaves from the tree only to suspend them from hundreds of helium-filled balloons.  Each leaf, while still attached to the tree, gets lost amongst the crowd of branches and other leaves.  Once the leaf is pulled, it’s identity and importance are realized, no longer simply being a part of the tree that created it.  But this independence from the tree is only a farce for the leaf, being tied to a mylar balloon filled with helium, it is in the air still but only for a short while.  Over the course of the show, the balloons slowly sank to the gallery floor.  The balloons were artificial, and their buoyancy was temporary, gravity took hold and brought the leaf to its fateful location – the ground.

In addition to the leaf and balloon installation, there will be an image of the tree, before it was ever disturbed, divided into 39 industrial laser jet prints.  The tree, being photographed and printed to achieve accuracy in its’ depiction, ends up appearing as a specimen under cold, analytical examination.  Each print is hand-cut to remove all background information, leaving the flat visual of the tree.  The cut paper is then placed between two sheets of vellum and sewn to together, further distorting the accuracy of the image.  These framed units become just composites of the original form, but are still a unit of the whole, much like the leaves of the tree.

Through the use of my complex processes, I break down images of the natural world into metaphors about life itself.  Is living merely the accumulation of little experiences, or are the little experiences what makes a life lived? 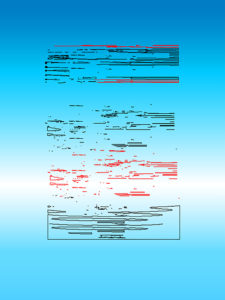 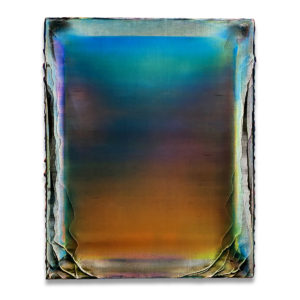 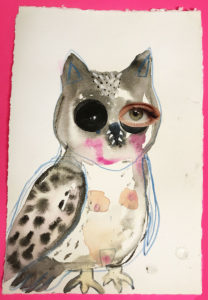 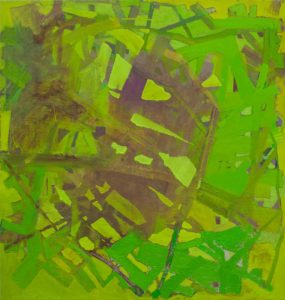